Let’s talk about something that is near and dear to my heart: Debugging.

Debugging is so much more than the mundane, frustrating thing it seems to be on the surface. It is a pure exercise in something deeper, something extraordinarily significant: The ability to think and reason about problems.

Why am I passionate about this? Two reasons:

Problem-solving as a skill

So what does the problem-solving skill look like? It a mindset, or a way of thinking about any problem you encounter. It is built on two different, but equally-important approaches:

I’ve painted the broad strokes of what problem-solving looks like at a high level. For the rest of this article, I’m going to detail a few basic principles that will help shape the proper mindset for approaching and solving a problem.

As the title of this article states, these principles are aimed at a software debugging context. If you’re interested in reading a general-purpose treatment on how to reason about problems, How To Solve It, by George Polya is a popular book, and I highly recommend it.

1. Think before you do

When something goes wrong, the very first thing you should do is stop and assess the situation.

You will be tempted to skip this part, particularly if one or more of the following is true:

When you assume that you know what the problem is, you take action blindly, without being sure it’s the right action.

When the pressure is on, you make rushed decisions, and you don’t leave time to think through what you’re about to do.

Give yourself permission to take a breath, step back, and reason about the problem from a conceptual level:

Remember: You will always make better decisions when you are calm and not panicking.

An inspirational figure to me in this regard is Joseph Joffre, Commander-in-Chief of French forces on the Western Front in World War 1:

Always calm and always in control, he did not panic despite the seriousness of the new Allied position; he even kept to his normal daily schedule, which included an enormous lunch and a nap.

Joffre refused to give in to panic. He made it a point to ensure that he was in the best possible state to be making critical decisions.

If he can do it during the most dire circumstances, in situations where many lives hung in the balance, surely we can pause and think before we act.

Why is it so important to ask questions before trying to fix things? Because we need to acquire information that either supports or refutes our working theories from step #1.

We’re gathering evidence that will refine our hypothesis so that we can test it in the next step.

A popular technique for asking the questions necessary to determine the root cause of a problem is The 5 Whys: Start with the thing that you immediately know is wrong, ask why, then answer it. Then question the resulting answer until you have asked “why” 5 times (or have arrived at the root of the problem). 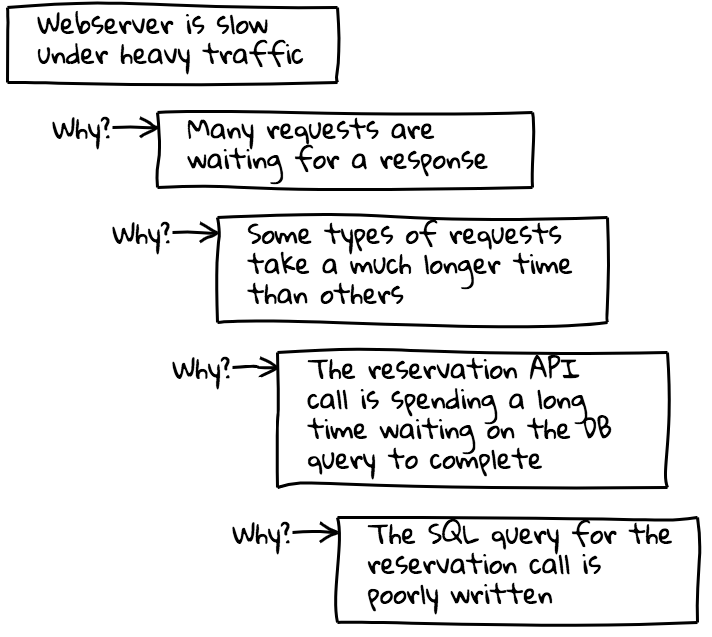 This is where we put on our detective hat and get to work. While this is an incredibly nuanced and intuition-driven process, here are 3 tips to orient you in your approach:

For a look at what the investigation process and use of debugging tools looks like in the real world, check out Indeed Engineering’s blog post on debugging high system load after migrating to Java 8.

3. Claim only what you can prove

The Golden Rule of Debugging: If you can’t reproduce it, you can’t fix it.

Let that sink in. If you aren’t able to reproduce the problem at-will, then the best possible guess you can make is still a guess.

I’ve seen too many examples where an engineer has checked the logs, made a conclusion, and implemented a “fix” without proving it. Don’t do that.

Remember: The only thing you’re sure of at this point is:

Reproducing the problem proves that you understand it, and will provide the environment to conclusively test and prove the fix.

Your environment should include all of the components necessary to reproduce the problem, and only those components. For example, you might spin up an instance of a microservice that is misbehaving, connect it to a DB running a snapshot from production, and then simulate HTTP requests to the service via curl.

If you add additional layers and components to your environment when they are not necessary for the reproduction of the bad behavior, you will increase complexity, distracting you from the real issue and slowing your progress.

Your goal here is to remove as many variables in the equation as possible.

Test the thing you care about

Conversely, you don’t want your environment to be so simple and basic that it no longer resembles the real-world environment.

Copying and pasting a snippet of Python into a new file and running it at the command line will likely not be useful for debugging a Django system.

Your environment should be as simple as possible, and no simpler. The components should still be set up in a way which reflects the target environment that the fix will eventually go into.

Recently, a junior engineer was tasked with debugging Chef bootstrapping issues when bringing up our webserver instance. The engineer reached out for help, and described being stuck trying to get chef-solo to execute the cookbook locally (outside of the established Jenkins/Chef server environment).

The engineer had scaled back to an environment that was too simple, and did not accurately reflect how our target environment worked. After the engineer was advised on how to utilize the proper Jenkins/Chef pipeline and gather the resulting log data from bootstrapping, the issue was quickly tracked down.

Debugging issues with running chef-solo on a laptop was a problem unrelated to the real-world environment, and a distraction from tracking down the true issue.

Figure out a tight dev/feedback loop

When you’re developing a fix, it’s not enough to simply have good insight into how the system is behaving and the data flowing between components. You need to have an environment that allows for easy manipulation and changes, as well as rapid feedback on changes.

We’ve probably all heard the cliche quote (often wrongly attributed to Abraham Lincoln) about spending time sharpening the ax before chopping down the tree. The point is a valid one, however.

It’s just as important when debugging and implementing a fix: Ensuring you have a rapid cycle between attempting a fix and observing the effects of your changes is our version of the sharpened ax.

Approach #1 limits your freedom and desire to experiment and try new ideas.

Approach #2 renders you unable to conclusively measure the impact of any single change, or be sure of which change actually rectified the issue.

Spending time to learn the best tools and methods for debugging in your particular language/framework/environment is a great investment, and will pay dividends down the road.

Every single one of us, no matter how talented or experienced, will encounter problems that we need help with. The ability to humble yourself and ask for help is a good thing, and every organization with a healthy culture will encourage and enable it.

That said, there is a right way and a wrong way to ask for help.

Do your own detective work

No one wants to do your thinking for you. You should never seek help without attempting to understand and solve the problem yourself.

At a minimum you should be able to answer the following basic questions:

Struggle through the problem first

Struggling with a problem is an absolute must. If you run for help at the first sign of a block or struggle, you are short-circuiting your learning process. The ability to debug is like a muscle, and it gets better with repeated exercise.

Don’t ping someone every few minutes with a live update of your troubles. Wrestle with the problem for a while, and accumulate a series of questions to ask all at once. This will also give you time to think about the problem, and possibly come up with a solution on your own.

Make sure you understand how to explain it

Referenced in the book, The Pragmatic Programmer, so-called Rubber Duck Debugging describes a programmer who would carry around a rubber duck and force themselves to explain the problem and the code in great detail.

The idea is that, by forcing yourself to understand it well enough to thoroughly explain it to someone who doesn’t have the context, your brain might understand the situation well enough to know where you’re going wrong.